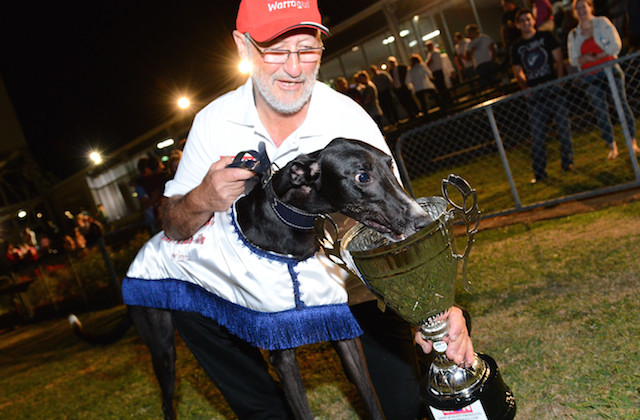 Ronray is the Spirit of Warragul

Reid, whose father Peter Reid is a hall of fame trainer, has been involved in greyhound racing his entire life with tonight’s triumph the best of his career.

“I’m over the moon, I haven’t had a thrill like that in ages. It’s probably the greatest thrill I’ve had in the sport,” an elated Reid said after the race.

Not only did the win provide a thrill, the sentimental value of it being at a track where he had such fond memories added to the night.

“It is really special to me (winning the Warragul Cup), I spent most of my early life in Gippsland. We’d drive from Murrumbeena, which is where Dad trained his greyhounds.

“When I got a driver’s license Warragul moved to Friday night’s and I’d be up here (at the track) until the trials had finished.

“I was 35 years old before I realised that you could go home before the last trial had finished,” he laughed

Ronray Spirit is undefeated in four runs since coming to Victoria with tonight’s victory being the biggest of his career.

Reid believes that early speed is his greyhounds best attribute but having a greyhound that wants to run to the fence - Narralee - in box seven for the final helped his cause because it provided extra room early in the race.

The son of Cosmic Rumble and Ronray Disco has spent most of his career in New South Wales. His Warragul Cup victory was made possible because of a strong friendship and some masterful placement.

“A very good friend of mine, Ray Steel, trained him in Sydney and the dog was flying and he rang me and said ‘look, I’ll send him down for the Shepparton Cup’, Terry recalls

“When he won at Ballarat in 24.94 (seconds) I said why don’t we go to the Warragul Cup and he said ‘you’re in charge, you’re the trainer do whatever you like’.

Ronray Spirit (box eight – $8.00) beat $1.80 favourite Luca Neveelk (box one) who missed the start but powered through the field while Ride The Rails (box four – $4.10) produced an outstanding run to finish third after being near the rear of the field.

The talented chaser will be targeted at the Shepparton Cup with the heats of that race to be run on Monday 2 February.

Ronray Spirit’s career record now stands at 11 wins and two placings from 17 career starts with the $45,000 first-prize taking his career earnings to $59,000.