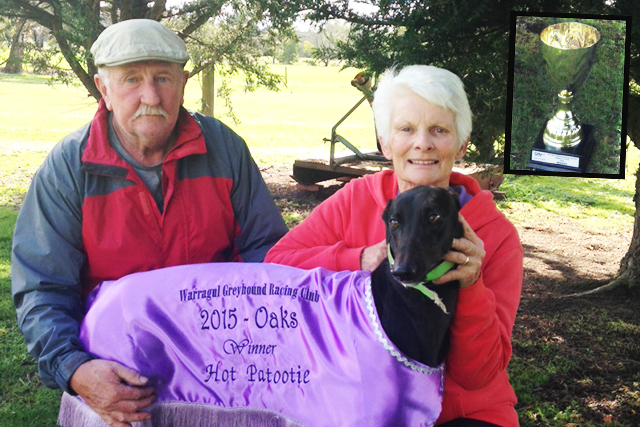 The Hastings couple, pictured above, are a genuine tale of patience and persistence. They have bred, reared, educated and trained a small team of greyhounds for the past 25 years, with Victor describing victory in the $10,000 to-the-winner Warragul Oaks as their greatest achievement in the sport.

“This is the best win we’ve ever had. We’re so pleased we had Hot Patootie’s name embroided on her rug today,” Victor, 71, said on Friday.

“The very first greyhound we had was Superfly Guy, who ran second to Dashing Eagle in the Sapphire. We haven’t had a city winner since 1995, but we breed in small numbers and while we haven’t any champions we’ve had a lot of dogs that have won half a dozen or more – especially in recent times – and to us, that’s a big achievement.”

Victor says he and Carol are a little unorthodox with their methods, but there is no question that their hearts are in the right place, and they have no regrets even if it “has taken 25 years to win our first trophy and rug.”

“We do things differently in some respects. By that I mean that a lot of people in greyhound racing focus mostly on one thing in the sport – either breeding or training or educating for instance – but we do the whole lot ourselves.”

“It is probably why we haven’t been as successful as some other people, but we are very hands on and enjoy doing things this way. It’s not about the money for us. We just like being involved with our greyhounds every step of the way,” Victor said.

Hot Patootie paid $12.10 for the win in the Oaks – her third victory from seven career starts – with her early pace allowing her to lead all the way against her more fancied rivals. Asked whether he backed her on the night, Victor replied…“I had $5.00 the Place on her and got back $10.50, which was exactly enough to buy me a Baccardi & Coke,” he said.

“They wake up at 4:30am each morning and have a coffee together before wandering down to the dogs to start their day. They get the biggest thrill seeing their dogs in the morning and they buy a picture every time they win a race…”

Son Adrian said his parents’ involvement in greyhound racing means a whole lot more to them than they even realise.

“They wake up at 4:30am each morning and have a coffee together before wandering down to the dogs to start their day. They get the biggest thrill seeing their dogs in the morning and every one of their greyhounds goes through the Greyhound Adoption Program (GAP) when they finish racing. If they don’t get into GAP then they keep them as pets themselves.”

“Today (last Friday) they are heading back to Warragul (100km away) to race Hot Patootie’s brother (Phil Miyoot) in a Maiden race for $500, and you’ve never seen two more excited people in your life.”

“Money is irrelevant to them. They’d do it for $50. They are so enthusiastic. They always buy a picture every time they win a race. They rarely have dogs in full stake races – it’s nearly always Tier 3 events. Prior to winning the Oaks the most money they’d ever won in a race was $2,500 (in 1995). Sometimes they’ve gone two or three years without a winner, but they don’t care…greyhounds are the biggest thing in their life.”
.