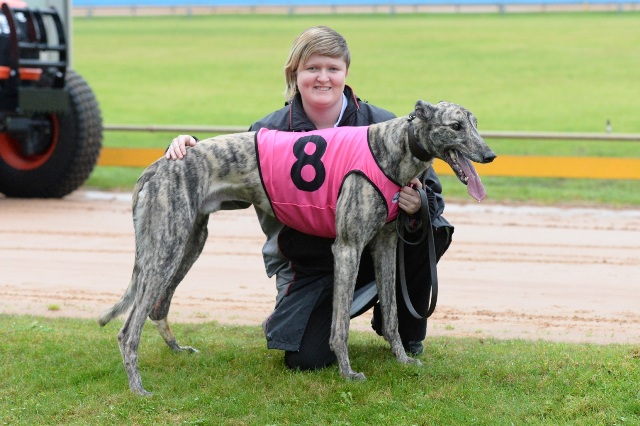 
April 25, a cold night at Shepparton the tables turned for Revision (pictured) and the question in the Hopkins family was and still is – was it Sheree Hopkins’ magic touch that started the cracking form of the Jess Hopkins trained Revision?

The beautifully bred son of Collision and Goldie Bale went into his fourth Victorian start without a placing to his name.

“He wasn’t doing much over the 400 and 500 so I decided to trial him over 600 against another one of my dogs Certified. After the trial I thought it would be a good idea to put him in at Shepparton over 650 to get his confidence back,” trainer Jess Hopkins explained.

WATCH: Revision’s first win over the middle distance at Shepparton from box five.
Revision clocked a personal best and best of the day time of 37.48sec, within five lengths of the track record which was set in 2010 by the Robert Britton trained Nellie Noodles.

“I didn’t expect him to lead at all, mum handled him that night and she believes her touch turned him around,”

“It was amazing, especially for a dog that just started over the distance. He pulls up after the longer runs really well too, it’s like he hadn’t even raced.”

Tonight at Warragul Revison and Jess take on a new challenge, the 2016 GRV VIC Bred Distance Series over the 680 metre distance. Deservedly so, Revision is currently sitting $3.00 favourite after drawing box four.

“He should go well but he does have to begin off box four. He isn’t weak, but he isn’t strongest!”