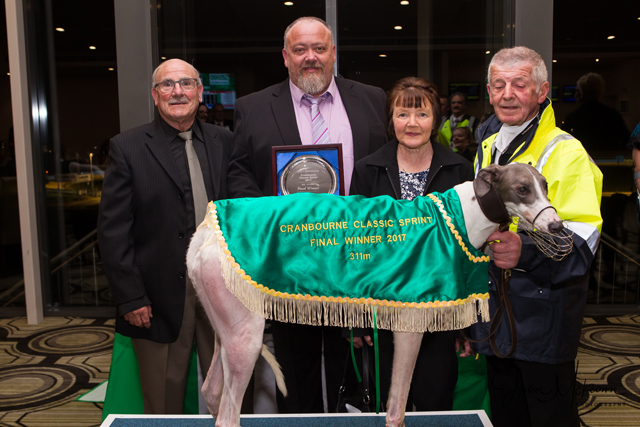 
Fully Loaded has set the Gippsland region alight with seven victories from seven starts over the shorts at his home track of Cranbourne and a little further down the road at Traralgon.

Owner and breeder Darren Puleio believe the secret to Fully Loaded’s success on the track is the guidance of his trainer Neville Wakefield who has more than 50 years experience in the sport.

“Neville knows the dog so well and has placed him in his advance every start – he has done a fantastic job with Fully Loaded and the dog has exceeded our expectations,” Darren Puleio said.

The son of Fernando Bale and Nicki Fields is apart of one of the hottest young litters currently racing which includes Poke The Bear, Out Of Range, Slippery Sam. He’s Okay and True Talent.

“Taking Fully Loaded slow and making sure that he isn’t doing too much too soon is why I started him out over the shorter distances – I didn’t want him burning out and therefore giving him a reason to not want to race,” trainer Neville Wakefield said.

Fully Loaded his making his return to the racetrack tonight at Warragul following a sore shoulder in which he sustained after his win in the $7,000 Cranbourne Shorts Puppy Classic (311m) in August.

“I think he is capable of going eight from eight tonight. He is making the step up in distance to the 400 but he has a different run into the first corner and I don’t think he will be running any super times just yet,” Puleio said.

“I think he will handle the 400 well tonight, he has brothers running over 500 but his early pace is what sets in apart and I think he will take some running down if he finds himself in front tonight.”

Fully Loaded has drawn box seven tonight in a mixed 4/5 and is picked second by the Watchdog who has selected Alberto for William McMahon on top.

About Molly Haines - Communication Assistant at Greyhound Racing Victoria with 16 years of experience working with greyhounds in all capacities. View all posts