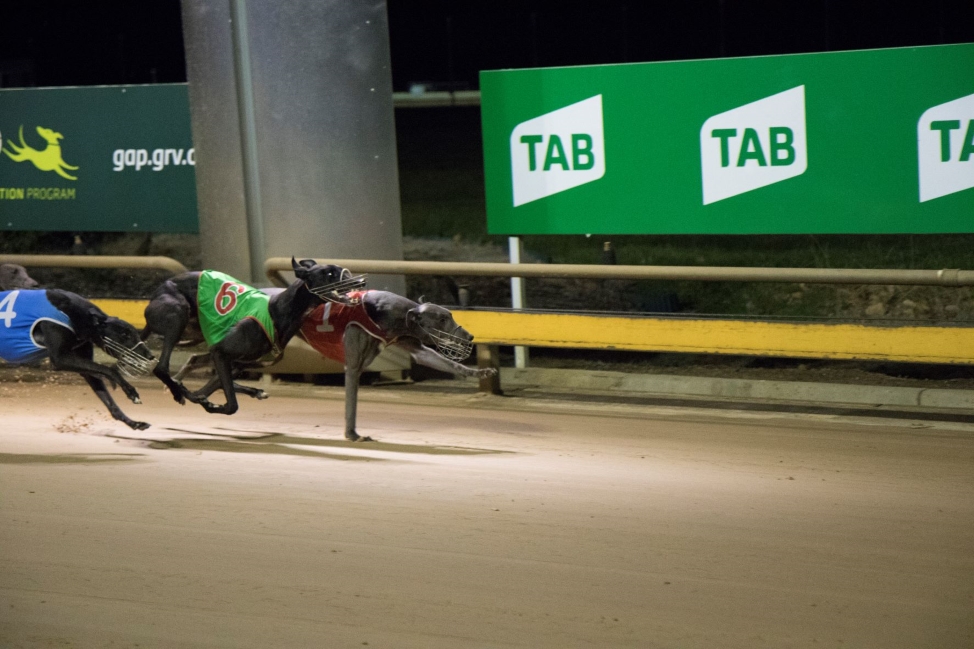 But when you factor in that Reg, 77, bred Norwegian Wood’s Barcia Bale x Lady Ceecee litter in partnership with the late Karen Leek, a long-time friend and much-loved industry icon who passed away in tragic circumstances last May, it was extra special.

“I knew Karen for years and years and I was so rapt to win that race for what it meant to us and to Karen’s family,” Reg said.

“Karen’s sister Wilma rang me after the race and she was just blown away.

“I was walking back with the steward afterwards and told him about Karen’s involvement and I said I hope she was looking down. That would’ve been fantastic.”

While Norwegian Wood hadn’t won in her two previous starts and was sent around at double figure odds, the price didn’t factor in the angel on her shoulder.

After running second on debut, Norwegian Wood qualified for the Vic Breeders Final when finishing third in her heat.

She was then one of the roughies in the final but dug deep in a desperately tight finish – perhaps with the aid of divine intervention – to defeat bluebloods Big Sky Rico and Wing Chun Girl, half-relations to 2020 Melbourne Cup winner Hard Style Rico.

Boyce and owner Michael Anderson were delighted with the performance but this result was about much more than times, margins and prizemoney.

“Karen rang me one day and said she had a brood that’d come on season, she was well-bred, but Karen was overloaded and asked if I’d like to take her for a litter,” recalled Boyce.

“I had a think and looked for a sire and told Karen I wanted to go to the best and the best at that time was Barcia Bale.

“Karen and I agreed to go 50/50 the whole way through and that’s what we did. Karen picked her pups and I picked mine. My wife, Anne, didn’t know Karen but they became really good friends.

“I spoke to Karen on the Sunday and then on Tuesday I got the phone call about what had happened. It was heartbreaking. We were devastated. We really were.”

Reg also trains three of Norwegian Wood’s littermates that are yet to race and he has high hopes for them.

“They’re young and green. They lack a little bit of early pace but they’re strong. The mother (Lady Ceecee) went over the distance and her brother Sir Jay Jay ran against the best stayers in Group races.

“I like to win any race but a Vic Breeders is a nice race to win with a young dog. Norwegian Wood had the box (one) but she came from five lengths behind them and beat some well-bred dogs.

“I’ve been training for 54 years and while we don’t have the numbers we used to the dogs give us a good reason to get out of bed in the morning!

“I’ve been involved in two sports over the years. I won team and individual gold medals at the Asian Games in Olympic trap shooting.”

Reg prepared a double at Warragul, with superbly bred youngster Catch, a half-sister to last week’s G1 Brisbane Cup winner Equalizer, continuing the bright start to her career with her second win from three starts.