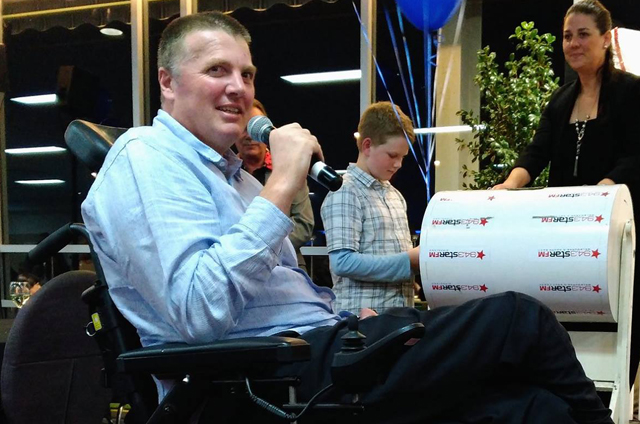 
Hundreds of people turned out to the Warragul Greyhound Racing Club on April 21 to show their support at a fundraising event for the club’s former president, Matt Height.

On Father’s Day last year the greyhound breeder/trainer suffered from a massive stroke, which had devastating effects on Matt and his young family. The life-threatening stroke saw him hospitalised for four months and to this day Matt still suffers from paralysis down the entire left hand side of his body. He undertakes occupational and physiotherapy each day in an attempt to overcome this.

Warragul GRC Manager Adrian Scott said it was fantastic to see so many people show their support for the Height family, including many from the police force as Matt was the Officer in Charge at Neerim Police Station.

“The night itself raised just on $15,000, and we have another $15,000 in the kitty from fundraising at the club and donations, so we are presently sitting just over $30,000,” Scott said. “The Height family are shopping for a wheel chair equipped car and the expectations are that they will have to spend around $35,000. It’s our objective to continue with the fundraising to cover the cost of a car.”